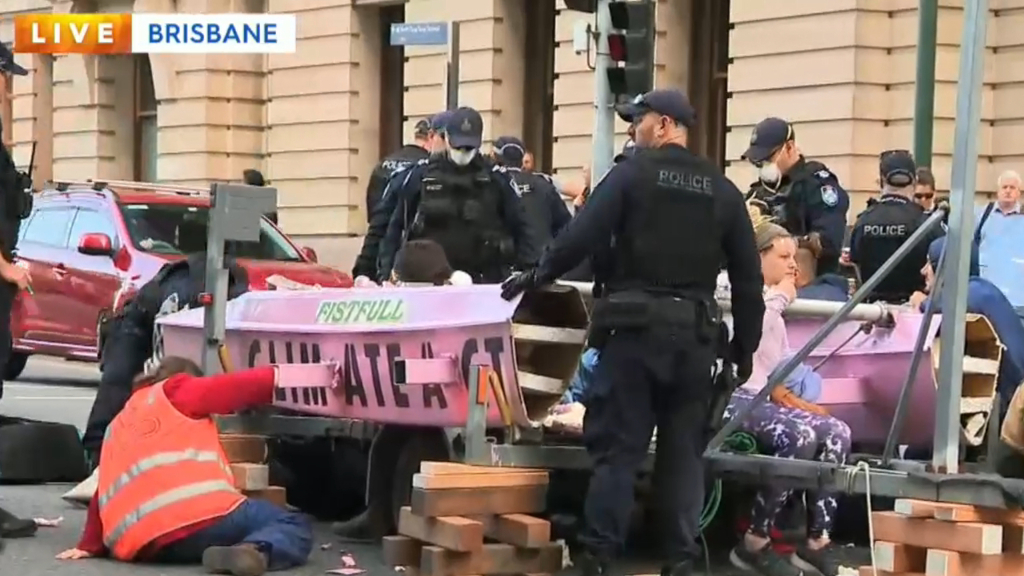 Climate activists are causing more traffic and commuter chaos today in major cities across Australia.
Around 100 people aligned with the Extinction Rebellion movement blocked the Princess Bridge in central Melbourne during morning peak hour.
The city's usually busy Southern Cross Station has also been brought to a standstill after protesters chained themselves to the intersection outside with poles across the top in an effort to prevent police from cutting through.
As well as those taking more extreme action, peaceful protesters are also singing and dancing behind a police issued barrier tape.
Activists in Brisbane are trying to completely block the intersection of Elizabeth and George Streets with some who have chained themselves to a pink catamaran and others who are breaching already imposed bail conditions to cause disruption and face off with police.
In Adelaide, activists planned a mass performance of the Nutbush dance routine in the CBD.
Sydney protesters are taking a more low-key approach to their campaign so far, with a small group standing outside the Sofitel Wentworth hotel, blindfolded and holding up signs.

The demonstrations are part of days of protests around the world demanding governments take greater action to combat climate change.
In Australia, organisers have called for governments to declare a state of climate emergency and set a target of zero global warming gas emissions by 2025.
In Melbourne, a heavy police presence was deployed to the CBD protest. More than 70 people were taken into custody yesterday during climate protests.
Officers were also in force around Victoria Bridge in Brisbane, where crowds of protesters were gathering, apparently undeterred by Queensland Premier Annastascia Palascszuk's plan to rush through legislation on charging protesters.
The protests have frustrated many Australians trying to drive to work and commuters catching public transport, who have faced lengthy delays due to the protesters blocking roads.