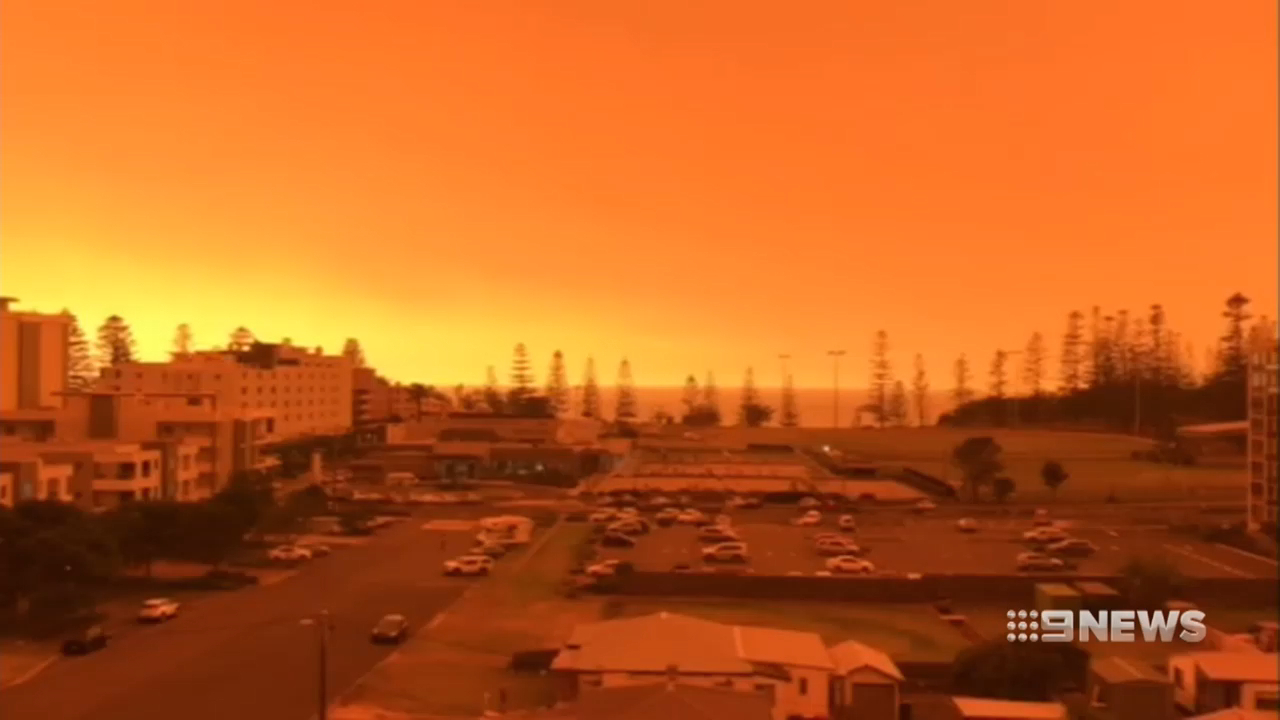 The NSW Rural Fire Services says there have been reports of people being trapped in their homes with fire crews unable to reach them as 16 emergency level fires rage across parts of the state.
About 1033 firefighters are battling to protect properties across the north coast and northern NSW areas, with the fire crisis likely to worsen.

READ MORE: Residents told to leave as Queensland fire splits
There are now unconfirmed reports people are trapped inside homes across multiple locations.
The advice from the NSW RFS is for these people to seek shelter inside and wait until the fire front passes and then when it has passed try to get away the structure if it is burning.
Nine News has been told there are "hours and hours to go" of this fire situation.
RFS Commissioner Shane Fitzsimons told 9News the fire crisis "breaks new ground in NSW".
"We have 17 fires spread from Queensland border down to the mid-coast area of New South Wales," Mr Fitzsimons said.

" So you've got a pretty significant geographic area and because you've got so many of these fires burning in a particularly dry landscape.
"We keep talking about this, but the volatility of the fires is quite extraordinary."
There are also more than 200 firefighters and 50 fire trucks at the scene of a blaze in Riches Avenue, Woodford where properties have been lost. The exact number is not yet known.
"A number of fires in the north coast and northern NSW areas are becoming more intense - and more dangerous," RFS NSW said in a post to Twitter.
"Some are creating their own weather conditions and pyrocumulous clouds are developing. These are extremely dangerous. Do not be caught in the open."
The areas most affected by the dangerous blazes include Tenterfield, Armidale, Clarence Valley, Port Macquarie, Nambucca and Kempsey.
MidCoast Council mayor David West is anguished as residents face dangerous conditions near Taree.
"From my personal perspective, it's horrifying," he told AAP.
"I've never felt a sense of anguish that I do now, the fear for my community."
Mr West said of one fire near Forster: "It was literally a wall of yellow, horrible, beastly, tormenting flames. It was a horrendous beast."

The mayor - who lives in Brimbin - is particularly concerned about an out-of-control fire burning near Hillville south of Taree. That fire crossed the Pacific Highway as it spread quickly.

So intense are one of the blazes, the major highways are closed.
The New England Highway is closed in both directions between Tenterfield and Glen Innes, the Pacific Highway is closed in both directions between Taree and Bulahdelah.
The Pacific Highway is also closed at Port Macquarie between the Oxley Highway and Hastings River Drive.
Motorists are advised to avoid these areas and delay non-essential travel.
"It (the Hillville fire) moving toward the coast at a fairly rapid rate," Mr West said.
"The area that I live in hasn't been burned in about 30 years. There's a huge amount of fuel load."

A number of schools have been closed in the area due to the bushfires.
MidCoast Council deputy mayor Claire Pontin - who lives in nearby Hallidays Point - says the area is "tinder dry".
"It's just crispy. In places, you can hear the leaves crunching under your feet."
Five schools on the NSW mid-north coast have closed due to the fires. These are Bobin Public School, Harrington Public School, Nymboida Public School, Telegraph Point Public School, and Yarrowitch Public School.
The fire at Torrington, near Tenterfield, is almost 14,000 hectares in size and is burning to the west of Silent Grove Road as firefighters battle the blaze ahead of worsening conditions predicted later in the day.
People in the areas of Torrington, Silent Grove, Wolfram Hill, Tungsten, Maids Valley and Mole River are being advised to seek shelter as the fire approaches.
"Unfortunately we are in uncharted territory this afternoon - we've never seen this many fires concurrently at emergency warning level," Mr Fitzsimmons said.
Mr Fitzsimmons earlier said two homes had been damaged or destroyed in the fire burning at Stockyard Flat near Walcha with assessors yet to reach the site.
Fire and Rescue NSW Commissioner Paul Baxter says at-risk residents need to be ready to act.
"Once a fire gets to an emergency alert level we may not be able to get to help you," Mr Baxter told reporters.
"We haven't got the resources to be able to put into every single area so you must be prepared to survive yourself."
The escalated fire risk comes after a man, aged in his 50s, suffered serious burns to his legs and hands while trying to defend his rural property in Yarrowitch, east of Walcha, yesterday.
Dust is expected to be blown across much of the state's northeast on Friday with the Central Coast and Newcastle areas the worst affected.
The fire danger should lessen over the weekend, although threat levels were forecast to rise again on Tuesday or Wednesday next week, Mr Fitzsimmons said.
Bureau of Meteorology duty forecaster Rose Barr says there should be a brief reprieve in fire weather conditions as temperatures cool over the weekend.
Firefighters have been working around the clock to battle dozens of other blazes burning across the state, with 1,200 calls made triple zero.
Authorities have urged residents, particularly in the state's north-east to be vigilant, as conditions are expected to worsen this afternoon with winds on the way.
The service deployed 850 firefighters yesterday and a similar number is expected today as 69 bush and grass fires blaze across the state.
A total fire ban is currently in place for Far North Coast, North Coast, Greater Hunter, New England, and the Northern Slopes.
Four watch and act alerts remain in place for Andersons Road, Carrai Creek, Gum Scrub and Stockyard Flat.
Yesterday fire crews fought a fire at Stockyard Flat, 60km north-west of Forster, with the help of aircraft regularly dropping water and retardant.