NSW and Queensland fires: Two bushfires burn out of control near Sydney 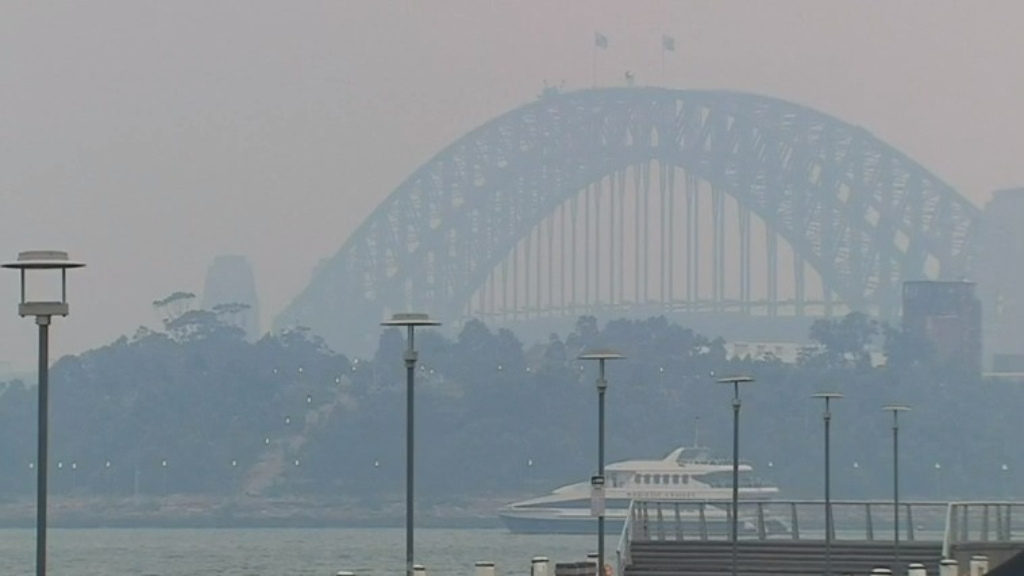 Two bushfires are burning out-of-control across New South Wales, with one threatening homes in Sydney's west.
The NSW Rural Fire Service says the fire at Smeeton Road in Cranebrook is now at emergency level.
The fire is burning in an easterly direction with waterbombing aircraft and firefighters battling to contain it.
A fire is also burning near Bateman's Bay on the NSW South Coast.
The Currowan fire has been upgraded this afternoon to emergency level again after it's believed to have destroyed one home last night.
"It got kind of scary," resident Mal Watson said.
"What matters, I have my family here and I have got the horses are okay, the dog's okay."

The Princes Highway is closed between Turmeil and the Kings Highway turnoff after the fire crossed the road.
Meanwhile, a car crash which killed a driver in the state's Hunter Valley has sparked a series of small bushfires, as hazardous smoke from other blazes across the state continues to linger over Sydney.
Emergency services were called to the accident at Leggetts Drive, near Kurri Kurri, after the vehicle hit a pole at 10.15am. The driver, who hasn't been identified, was found dead.
The car caught alight and sparked several spot fires which firefighters are trying to control, police say.
The fire remains at Watch and Act level. A new Watch and Act is in place for a fire near Kempsey at Carrai East.
SYDNEY SHROUDED IN SMOKE
Meanwhile, hazardous air quality warnings remain in place for Sydney, with the East and South West of the city worst affected by smoke.
Landmarks including Sydney Harbour and Bondi Beach have been choked in the toxic haze.
A pair of tourists from Hong Kong visiting Bondi Beach said they were surprised at the air quality.
One woman wore a mask to protect from allergies.
"We find it's really smokey. We're surprised," she said.
Other beach-goers didn't let the conditions put them off enjoying the famous surf.
People with lung and heart conditions have been warned to stay inside as much as possible because of small toxic particles in the air.
A visibility warning has also been issued.
Tomorrow's air quality is expected to improve,  according to the Department of Environment, but will still be regarded as "Poor".
DANGER NOT OVER ON SOUTH COAST
Meanwhile, firefighters have warned residents on the NSW south coast a bushfire is still burning.
The Currowan fire between Batemans Bay and Ulladulla has been upgraded to Emergency level again this afternoon after it's believed to have destroyed one home last night.
"It got kind of scary," said resident Mal Watson.
"What matters, I have my family here and I have got the horses are okay, the dog's okay."
The Princes Highway is closed between Turmeil and the Kings Highway turnoff after the fire crossed the road.
Residents should take advice from firefighters in the area.
Other fires including in the Blue Mountains have been downgraded.
There are no total fire bans in place today but there is a "very high" fire danger stretching along the NSW coast and in the northern parts of the state.
EASING WINDS IN QUEENSLAND
Firefighters in Queensland have some relief today with high winds weakening.
More than 50 fires continue to burn across the state.
Yesterday crews faced brutal conditions as winds blowing in excess of 50 km/h caused a fire at Narangha to flare up.
Three properties came under threat but firefighters were able to bring it under control. Five regions of southern Queensland have reached a "severe fire danger" rating already, with extreme conditions possible in areas such as the Lockyer Valley.
While the winds are expected to drop off over the next two days, heatwave across Queensland will continue after the temperature nudged 40C in many parts yesterday, smashing records in many parts.
In Brisbane the temperature hit 33.9C - its hottest December day in seven years - the Sunshine Coast 36C and Gladstone 38.4C. And at Yeppoon , where the temperature soared to 38.9 C – it was the hottest December day for 24 years.
Temperatures eased slightly today, with a maximum of 33C in Brisbane at lunch time.
But heatwave conditions will return from tomorrow, with the city facing temperatures of 35C or above until Saturday. Ipswich can expect a maximum of 42C late in the week.